Published in Disease and Health, Parasites 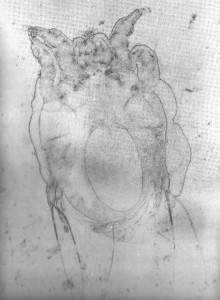 These are more common in young animals. They cause no major problem unless present in large numbers. Adult worms in the fox gut pass eggs in the feces (Figure IX). After several weeks of warm, damp weather, these eggs develop (embryonate) and become infective. If swallowed, they will tehn develop into mature intestinal worms in about three weeks.

The most serious risk is in young animals. Worm larvae will live in the tissues of vixens for several years. When females are pregnant, larvae migrate into the unborn young. There is little reaction unless very large numbers of larvae migrate. Then pneaumonia and liver damage will be seen. The migration allows infection to be established in young at an early age. Massive numbers of mature worms can be present by the time kits are three weeks of age.

Signs include poor fur and growth with a pot belly.

Worming can be done using a product such as piperazine. Young should be treated at least three times, several weeks apart. The first should be at about two weeks of age, then four weeks and, finally, at weaning. This is especially true if a problem exists. Adults may be wormed before breeding but this does not mean young will be free.

Alternative effective treatments would be Ivomec, Panacur or Strongid.