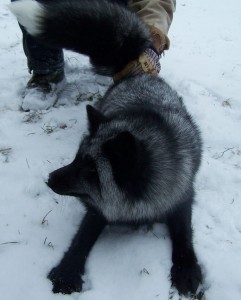 Male silver fox pulled from the pen for inspection prior to breeding season.

This is normally the time that the rancher will start to check over the condition of the foxes to ensure that they are in good body shape for going into the breeding season. Feeding and watering are the primary jobs to be done at this time of year. It is very important to keep a close eye on the body condition of your breeding herd. The quality of the feed is very important to ensure that your breeding herd is in good condition. It does not appear to present any problems for the breeder females if they are kept a little on the heavy side, but not too heavy.

This extra body fat helps them to get through the cold winter months a little better. It also provides a valuable reserve for the females when they give birth to a litter of 5 or 6 puppies. It is felt that this little bit of extra body fat will help her to maintain her strength during the 4 to 5 weeks she will be nursing those growing puppies.

Another rather important factor to be considered is the housing of the breeding herd. When housing the herd in a shed, it must have adequate skylights so as to allow as much daylight in as possible. Another option is to house the breeding herd in pens out in the yard. The housing can play an important part in your breeding program. Insufficient daylight can either delay or, in some cases, even prevent the female from coming into a proper heat cycle. Besides providing plenty of daylight, the placement of your males and females, pups and adults can be a very significant part of your breeding program. A worst-case example is to house the males in one area and your females in another. This will minimize the production as many females will not come into heat and those that do may have a poor whelp rate. It has been found that if the males and females are intermixed, the females tend to come into a stronger heat cycle and this will result in better production. The ideal placement seems to be a male (pup or adult), pup female, adult female, pup female, male, etc. In summary, plenty of daylight, good nutrition and intermixing of males and females are essential for ensuring a successful breeding season.

This is a good time for the rancher to go over the last year’s breeding records. It is very helpful to check out a list of preferred breedings along with a second and third choice option. The reason being that sometimes the male of choice won’t breed the female of choice. Some other points to be considered when making out this list is the production performance of adults, and quality characteristics needed to be worked on. After a few years of breeding and raising foxes, the rancher will be able to see what desirable characteristics are being produced by each breeding. By using this information, it will help in producing more uniform quality pups.

Mid-January and early February is the time to start checking the females every five days until the female starts to show signs of coming into their cycle. Once the females start to show some signs of coming into heat, the females are then checked every three days. Once a female is starting to come into heat, that female must be checked every day. The rancher must try to remember how the females looked; he is looking for changes, not just a certain size, shape, or colour. It has been found that sometimes the pups do not tend to swell up as much as the adults at this time. When checking the females, a rut gage with a small probe is used, once a strong heat cycle has been detected. When the female has been bred, she may be taken out and placed in her whelping pen in the yard away from most of the activity.

From mid-February to mid-March, the majority of the foxes will be bred. It is important to keep breeding records up to date. Good record keeping is essential during breeding season. If records are not kept, it very difficult to improve the production, as well as the quality from year to year. Good production, good quality and large size fox are the key factors in making the operation successful.

The nest boxes are opened approximately two weeks prior to the female’s whelp date. Allowing access all season will cause unnecessary wear on nest boxes. As the due date gets closer, it does not hurt to feed the females a little extra feed. Do watch to see that they are not packing their feed. It is not uncommon for the mother not to have eaten the day before or the day of whelping. If she does not start back eating by the next day she may be given a little bit of beef liver, this will usually get her back to eating. 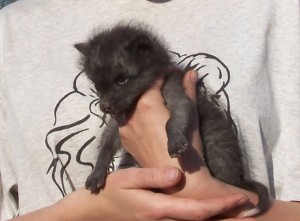 Silver fox pup in May. Variance in pup size early in the season is directly related to the length of your whelping season.

These are the months in which most of the females will whelp, 52 days after being bred. Some fox tenders prefer to not diturb the female following her whelp at all. They wait until the pups start coming out of the house themselves to get a count. This is done to create as little disturbance as possible and let the mother keep her feeling of security.

However, others inspect the litters each day to check for pup count and well being. The total number of live pups, as well as any dead pups are recorded. This total count is then later used in evaluating the males’ performance. The new litters are then checked every day for the first three days and then just randomly to make sure that there are no problems.

The mothers will start taking feed in to the pups at about three weeks of age. At this time the mothers are fed twice a day, once in the morning and again in the early evening after it has cooled down. At about four weeks of age, the puppies will start to come out and eat on their own. It is very important to make sure that they are given plenty of feed to avoid fighting amongst them. 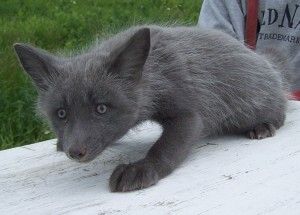 Pearl fox pup pulled from the cage for inspection and vaccination in late June.

Let us help you find suppliers as you begin to spread your pups out into their own cages. 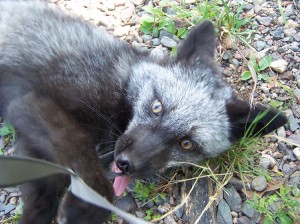 As the pups reach 10 to 12 weeks of age they should be vaccinated against distemper. Antibodies from the vaccinated vixens will be passed on to pups and protect the pups for the first few weeks. These same antibodies will destroy the vaccine virus if pups are vaccinated before they are 10 weeks old. Booster shots for distemper will also be given to all adult fox if being kept as breeders for next year. Adults to be pelted will probably not need to be re-vaccinated. Any adult foxes that are to be pelted should be in furring sheds by now. This is done to prevent any sun damage to the fur. Tattooing is done to all pups at the end of July, for ranch identification. This is also a requirement if raising pure bred registered foxes.

Good sanitation is always important, but as the year progresses, it becomes even more important to keep the area under the fox pens clean. Manure should be removed on a regular basis (at least every three to four weeks); if not, the resultant ammonia fumes can damage the fur. Keep pelting pens clean. Manure should not be allowed to build up on the wire pen bottoms. A close watch on the pens for any needed repair is very important. Broken wires may result in a fox being injured or fur being snagged. Not only is the animals’ welfare at stake, but the price you will be paid for your final product will decrease if you do not take excellent care of your stock.

All ranchers are encouraged to follow the Code of Ethics in caring for their foxes.

It is at this time that plastic is put on the sides of the sheds. This helps keep out any direct sunlight and it also prevents any wind damage to the fur. Depending on shed design, it may be necessary to add additional sun block using wood or steel. Direct sunlight must be kept off the foxes to prevent off-coloured fur.

This is a good time to go around and clean out the nest boxes in the yard and re-bed them with clean dry hay for the coming whelping season. They have had all summer to dry out and cleaning will be much easier now. This is also a good time to make any necessary repairs to the whelping pens.

The following weeks are noted as a critical period on a fox ranch to ensure that you have instilled security measures to prevent against unwanted animal visitors as well as extremists. Learn more about ranch security. 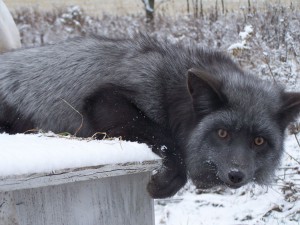 Pearl fox female presented for grading in November. This is the same pearl fox as in the photo above.

By mid-November, the best pups are picked for the next year’s breeding season. A careful balance of all factors is considered when making these decisions. Fur quality, production, size and temperament are all important factors. The importance of these will vary from year to year depending on what is already in the herd and what is needed to improve the herd. Each year the entire herd is graded, so that it is known exactly what is there and not what was thought to be there. A fox that graded out an “A” last year, could be a “B” this year. This is best done before pelting starts.

This will be one of the busiest months on the ranch. Early December is when the pelts become prime and it is time for the rancher to start to harvest his crop for the year. Adult males are pelted first, then adult females, early male pups next, then early female pups. Finally, late male pups are pelted, finishing with late female pups.

Learn more about the pelting process.