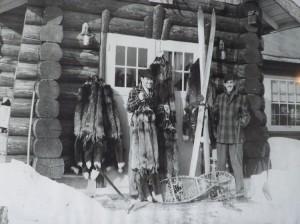 This old photograph is on display at the historic Fromm Bros Estate. It shows two men, visitors to the Fromm Estate, with silver fox pelts once marketed so effectively they were considered the best fox furs in world often fetching prices over $1,000 even during the Great Depression.

The fox is a member of the canine family and is known throughout the world in its wild state. Its size varies greatly depending on species.1

Domestic fox farming was initiated in the 1880s by Sir Charles Dalton at Prince Edward Island, Canada, utilizing captured “black” fox (a naturally occurring color phase of red fox). These animals were the ancestors of our present herds of farmed foxes.1

Through countless generations of selective breeding for color, size, quality of fur, fecundity, docility, mothering ability, growth rate, and litter survival, the farm-raised fox has evolved to be very different from its wild counterpart. Good nutrition, veterinary care, and adequate, secure accommodations have resulted in a larger, more robust animal exhibiting a much quieter temperament.1

In the 1930’s, fox hides were selling for a month’s wage. Farmers were desperate to get their hands on breeding stock. Fox fur and breeding animals became a major export for Prince Edward Island and brought tremendous wealth to the area during a time when most places were struggling. There is a film called “Those Little Silver Mines“ which documents the explosive rise of the silver fox industry on Prince Edward Island. It can be seen at the International Fox Museum and Hall of Fame in Summerside, Prince Edward Island, Canada. 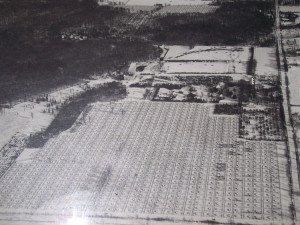 Breeding pens where large consuming huge tracks of land at the Fromm Fox Farm. This photo is on display at the historic Fromm Bros Estate in Hamburg, Wisconsin.

If you are in the fox ranching industry, you may have read the book Bright With Silver by Kathrene Pinkerton. An engrossing biography of the Fromms who established the once-world-famous silver fox farm in Hamburg, Wisconsin. She tells of the heart-breaking first years, of hard work and perseverance and faith in their ideal, of how the silver fox became a “fashion first.”  Then of sidelines in mink ranching and mutations. First edition copies of Bright With Silver are hard to come by, but reproductions of this book can be purchased at Janke Book Store in Wausau, Wisconsin.

The original Fromm Fur Farm and Estate was established as a National Historic Place and titled Fromm Bros. Historical Preservation Society in 2011. The facilities remain partially intact and can be toured or reserved for private events including the infamous, lavish-in-its-time clubhouse with pin setting by hand on the custom Brunswick bowling lanes. For more information, visit www.frommhistory.org.